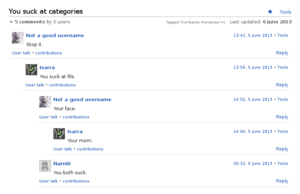 Mockup of a threaded discussion in a possible Flow implementation.

Flow is/was a project to implement an organised discussion system for MediaWiki. Involvement was during early stages, before development took place, consisting primarily of investigating viabilities of various options and attempting to convince people (especially existing users) that hey, this isn't necessarily such a bad idea after all.

Aspects worked on included the following:

For a detailed overview and content, see mw:User:Isarra/OPW thing.

They are 'progressive' only if the destination lies off a cliff.